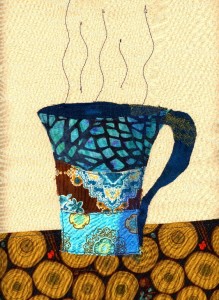 I have been waiting for this day for weeks! My first workshop in France begins today. I’ll be leaving shortly(after my cafe au lait!) to go to the Toulouse airport to rendezvous with everyone. It will truly be an international group. There will be 2 ladies from South Africa, 2 from Australia, 1 from Scotland and 3 from the US. I am excited to introduce them to and share with them this wonderful area.

Last week I had the pleasure of hosting Cheryl Frasca’s bead adventurers! There were many beautiful shiny things created during the week and they were intrepid explorers of our charming area. Thanks to Cheryl and the group for being such  a joy to host!

Tomorrow I’ll take my group into Revel for us to shop at Madame Lopez’s fabric store. Our first project will be a handmade Journal that I call an Idea Collector. There will be places to stash, postcards, ephemera, fabric samples, color palettes and places to jot down ideas and to take studio notes. I expect these books will be bulging with art inspiration and ideas to go home with by the time our week is over.

Madame Lopez has the most beautiful fabrics I have ever seen along with gorgeous tablecloths, aprons, dish towels, cloth napkins and lots of unique trims. She is always willing to cut what we would call a “fat quarter” and we can use these fabrics for our handmade journal.  Check back here next week to hear more about our adventures! 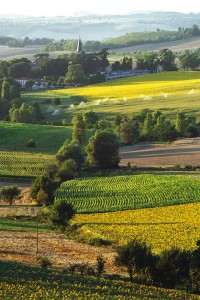 I thought I’d tell you a little bit about our lovely area called Le Lauragais. It’s also referred to as Pays de Pastel because producing the blue pastel dye was the main industry in this area in the 15th and 16th C. This lovely shade of blue was considered a magical color as the process of getting to the blue (by boiling the woad plant) changed before your eyes from green to yellow to blue. Pastel only fell out of fashion with the arrival of Indigo. In Albi I take my workshop participants to a small store that sells not only products dyed with blue pastel, but also the pigment itself and as ink, dye, watercolor, pastel and paint! 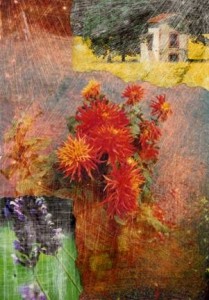 We are very similar in “feel” and “light” to Tuscany. Rolling hills of wheat and endless fields of sunflowers are patch-worked along with the beautiful forests of La Montagne Noire (the Black Mountain). We have a rich gastronomic history because of the fertile soil and farmlands. Cassoulet, goat cheese, foie gras, duck confit, are all specialties of the area.

Did I mention the rich artistic heritage in the area- more about that next post. A collage I did from images of the area.

I have been hosting Mary Beth Shaw’s collage/painting workshop this week. Many thanks to her lovely group for making my job a delight! I spent a bit of time in their art studio the other day and found wonderful art that really captures the essence of our charming area. The colors, landscapes, architecture, words- the spirit of the place is there in their collages, paintings and books..

My own art has been focused this week on my daily drawings inspired by the book The Confident Creative by Cat Bennet. It’s led to some very interesting styles of drawing. I’ll get my camera pics uploaded soon and show you. The way I am using my drawings to get to polymer clay is this:

I start with a drawing of something I see, or I redraw “in my own hand” a drawing from a picture I find inspirational. Then because I have been completely seduced by fabric, I do a stitched fabric collage interpretation of the drawing. The I use this fabric collage as my inspiration for a polymer clay piece (usually jewelry). 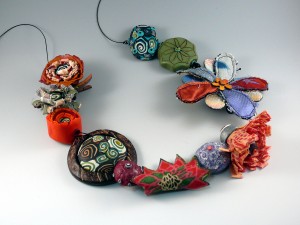 Here’s an example of a fabric collage. The flowers that circle the figure I then made in polymer clay as a necklace. I tried to use each flower in the fabric piece as  inspiration for creating a polymer clay interpretation of it.

New group of beaders arriving next week here at La Cascade! And more art to be made. Meet you back here next Friday. 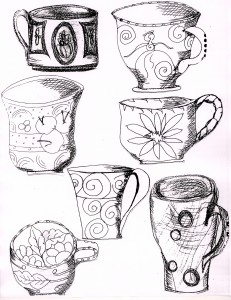 I’ve been planting the terrace and front flower boxes and getting La Cascade all bright and pretty to welcome the first workshop (taught by Mary Beth Shaw)- they arrive next week and I am really looking forward to sharing our wonderful village and area with all those coming this summer!

Our village had a tough winter. Durfort has been making copper ware since the Middle Ages (and still does even today) and we have unique streams that run down the middle of the street  The houses that line the streets were once copper ateliers and the little streams were used in the copper making process (for quenching etc). This winter these small streams froze and were covered my snow- highly unusual- and the result has been plumbing problems for our village. All is fine now but it’s been an experience dealing with french plumbers! (who have been the busiest tradesmen this spring!)

The big Saturday market is full of strawberries and cherries right now and I made the most delicious scones- fresh cherry and crystallized ginger. If you’d like the recipe (it’s easy) just get in touch with me here or email.

My art-making has been on hold in any serious way, but I have been doing a daily sketch and a daily photograph. My sketches are REALLY rusty so I’ll wait a few more days before I show them. I’m following a free photo tips course offered by David Peterson and finding it really interesting and helpful.

I’ll be posting weekly here on France adventures so please do check in when you can. 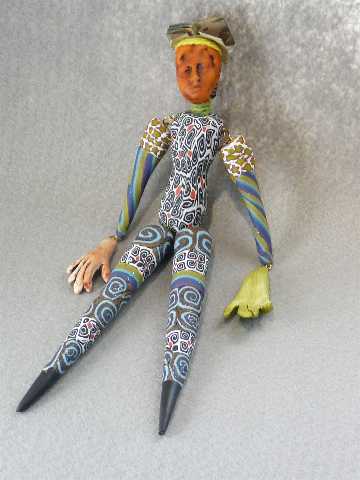